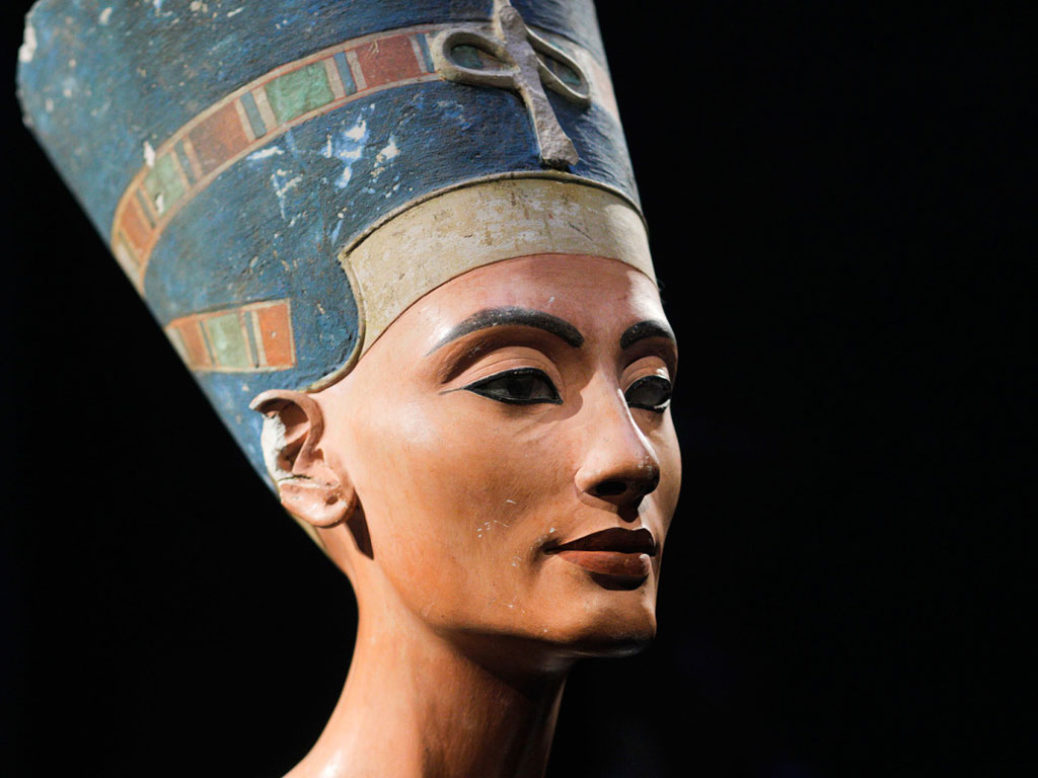 The most beautiful queen, according to ancient Egyptian legend, came back into the spotlight in order to remind us of the New Kingdom of Egypt; more specifically, of the 18th dynasty with Pharaoh Amenhotep or Amenophis IV (1351-1336 b.C. approximately), who later assumed the name Akhenaten, honoring the new god Aten. In the eyes of Akhenaten, the sun was deified and, during his reign, the Pharaoh introduced this one god, effectively discarding the pantheon of Egypt. Therefore, Amun/Amun-Ra/Amun-Re (also related to the sun), the beloved god of Thebes of Upper Egypt (South Egypt), whose worship had flourished since the time of the 8th dynasty (1580-1100 b.C.) when Thebes was the capital of Egypt, was banned and his priests persecuted. The atmosphere of the times, therefore, begins to shape because ancient Egypt was a polytheistic country, which was suddenly forced into monolatry – something that no one was willing to accept; yet no one could very well oppose the Pharaoh’s heretical beliefs.

So Nefertiti became the wife of Akhenaten (1370-1330 b.C. approximately). About her origins, based on her name, which in ancient Egyptian meant “the beauty has come”, experts opine two things: either that Nefertiti came from a neighboring kingdom to become the wife of Amenophis IV or, according to another theory, that she was the daughter of a high dignitary of Egypt, who had arranged the marriage along with Pharaoh Amenophis III (father of Amenophis IV). In any event, the marriage was realized and the young beauty (at about the age of 15) became the queen of Egypt. Akhenaten’s love for Nefertiti becomes evident from depictions, in many of which the Pharaoh is present at her side; while evidence suggests that the queen had power above the norm of the times. Further proving the special fondness of her husband towards her, in some murals, Nefertiti is shown wearing the royal crown.

From this union, the couple had six children (seven, according to one particular theory); all of them girls. This made succession difficult but it seems that Akhenaten took care of that problem: according to recent research (with the use of DNA samples taken from mummies from the tomb of Tutankhamun), Akhenaten probably fathered the next Pharaoh; yet Nefertiti was not the mother.

According to information from certain sources, the people of Egypt hoped that, following the union, Nefertiti would shift Akhenaten’s beliefs regarding the monolatry and the Pharaoh would return to the old ways and the old gods. But this never happened, since Nefertiti never obstructed her new husband in his worshiping Aten; furthermore, she herself became priestess of this new god. Meanwhile, Akhenaten moved the capital of Egypt from Thebes to the new city he built (once again in honor of the new god), to Akhenaten (meaning Devoted to Aten), now known as Amarna, situated between Memphis and Thebes.

All this made the political and social phenomena of the time more prominent and more intense; also, dissatisfaction for the royal family grew into hatred. Moreover, undermining and conspiracy by officials and priests of the old gods multiplied. Nefertiti became gradually more and more hated by the people and, later on, this cost her the eradication from every written source and the destruction of every depiction in art (portraits, murals, etc.).

The royal couple ruled Egypt for several years (their common reign was 13 or 14 years); that was as much as the people and the priests were willing to tolerate their heretic changes and reforms. After Akhenaten’s death, information suggests that Nefertiti disappeared as well (1336 b.C.). However, at this point, theories start to variate depending on the source or the expert: some want Nefertiti to just vanish from the face of the earth after the couple was overthrown from power (due to her bad reputation); others see her exiled to the Northern Palace of Amarna when Akhenaten exchanged her for another wife (Tutankhamun’s mother perhaps?); while yet others suggest that, after Akhenaten’s death, Nefertiti ruled Egypt herself during the years when Tutankhamun was still too young to rule (thus she was regent until the young successor came of age). In any event, after Akhenaten’s death, Nefertiti also disappears – not just from the foreground but from the face of the earth.

At one point, in 1912, German archaeologist Ludwig Borchardt comes along to place a piece in the puzzle by discovering the bust of Nefertiti among the ruins of the workplace of sculptor Thutmose in the ancient city of Akhenaten; the bust has been labeled a masterpiece and has been attributed to Thutmose himself.

According to very recent publications in the international press (August/September 2015), British Egyptologist Dr. Nicholas Reeves, who is a member of the Egyptian Expedition of the University of Arizona, claims that, in the context of this expedition at the site of Tutankhamun’s tomb (in the famous Valley of the Kings), he is one step away from the door that leads to a secret, non-violated, chamber of the tomb of Nefertiti.

The bust of Nefertiti is one of the most copied ancient Egyptian findings, if we take into account that it has been systematically reproduced a great number of times. The characteristically long neck of the bust sets Nefertiti apart as a unique element and symbol of ancient Egyptian civilization. Furthermore, from the size of the head, it becomes evident that ancient Egyptians gave particular emphasis to the size of any given personality depicted.

In short, the international archaeological community and, in extent, people interested in history and civilization around the world await in agony further developments from the excavation in the Valley of the Kings. For ancient Egyptian civilization never ceased to magnetize its admirers everywhere; and Nefertiti, in particular, constitutes one of its most well-kept mysteries.

Graduate of the Faculty of History-Archaeology

National and Kapodistrian University of Athens